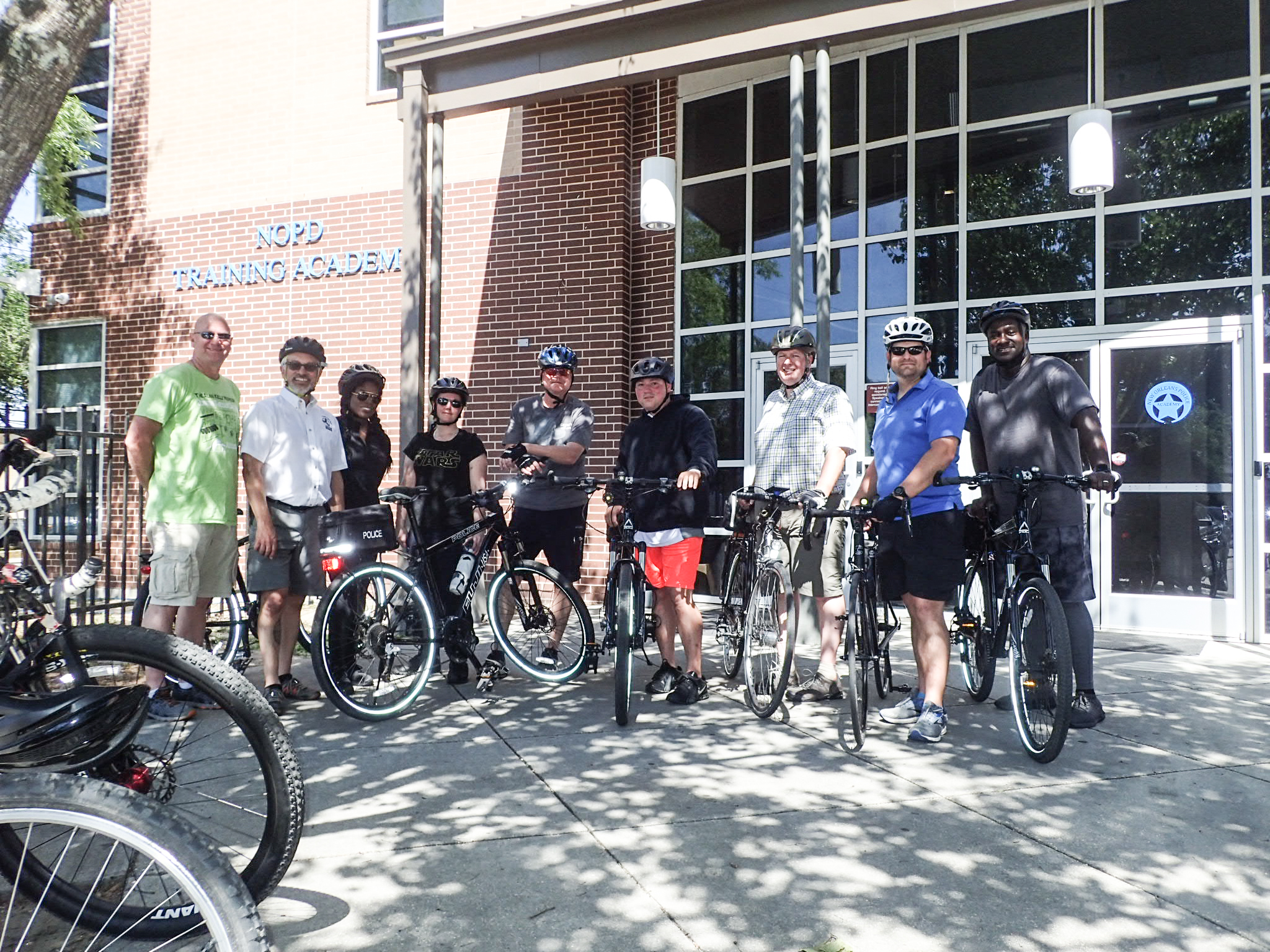 Yesterday I had the pleasure of working with nearly two dozen officers in the New Orleans Police Department. On what? Traffic law and bicycling. Officers from every district came to the session wherein we discussed how traffic law applies to people driving bicycles rather than cars. The session was the culmination of almost three years of effort.

A bit of background: I am a League Cycling Instructor (LCI) for the League of American Bicyclists (LAB). I am also a National Coach for LAB, training other instructors nationwide. In conversations with friends who are law enforcement officers, several of whom are avid bike riders, the topic of police interactions with bicyclists arose. We agreed that many officers, like everyone else, are unaware of the difference in perspective when you’re on a bike. You don’t look at the world the same way as you do behind the wheel of a motor vehicle. So we put together a course for officers. It included classroom time to discuss what the laws are and how they apply to bicyclists, and when they don’t. We included sections on engineering (how road design can help…and hurt), education (what we teach citizens), and enforcement (how officers can enforce the law equitably). It also included time on a bike – to put that classroom knowledge into practice, for officers to experience what it’s like to drive a bicycle as part of traffic. We did a pilot program in 2014, then got a grant to conduct it in multiple locations in one state in 2015. We’ve done it since with close to 400 officers in 4 states.

When I first moved back to New Orleans three  years ago, I tried to get the program up and running here. Two steps forward, one step back. One step forward, three steps back…You know how it goes. Multiple dead-ends. A glimmer of hope, and then another brick wall. But I didn’t stop. And then…a small step. And a big one…I didn’t know it at the time, but a conversation in January led to yesterday.

After the deaths of Sharree Walls and David Hynes on March 2 of this year, New Orleans rose up to voice concern for road safety for all. And after a City Council meeting with hours’ worth of testimony by Ms. Wall’s family, friends, and many other concerned members of the community, my phone rang. That conversation in January planted the seed. The phone call was from NOPD. “Les, that course we talked about? We want to do it.” “Great, when?” “Now.”

And after the talking, we got on bikes. And you could see the “Aha!” moment. “Why did the bike lane disappear?” “Riding here (in the door-zone bike lane) is dangerous….” “You expect me to go through all the water and debris in the bike lane?” “Wait – if I turn left here, the road markings say to go all the way to the right…and then cross an interstate on-ramp???” The theoretical knowledge turned into the practical reality of getting from Point A to Point B without the protection of a several thousand pound box of metal. And I think we made a difference. I hope that the officers who came yesterday will see things just a bit differently when they hit the road today. It was a small step. And a big one…