I was in Oklahoma this week. I did my law enforcement class in Tulsa on Tuesday. Representatives from several agencies in the region were in the class. It was a very rewarding session; good questions and comments, good participation overall. One officer even got up to draw scenarios and ask the other officers how they would deal with it! Another officer who commented early in the day that he’d “pull over bicyclists when they’re doing things that aren’t safe” left the class with a different perspective.

Wait! That was the point of the class, wasn’t it? The idea was to get officers to think about how the road looks when you’re sitting on a saddle instead of sitting behind the wheel of a big metal box hurtling down the road.

That second officer came up to me at the end of the day to say I had really changed the way he looks at bicyclists. Wow. He realized that, often, the things bicyclists do may look like they’re being unsafe, when in fact they’re moving in a certain way to keep themselves safe!

In the class I use a momentary diversion to illustrate that point. I talk about passing laws. I ask, “Assuming a motorist is in a place where passing is allowed, who decides when it’s OK to pass a slower-moving vehicle?” Of course, the answer is: the motorist who wants to pass. The passer decides when it is safe to move left and pass the slower-moving vehicle. Then I ask, “OK, then, who gets to decide where/when a bicyclist may move left, because any further right is unsafe?” Of course, the answer is: the bicyclist who is in the lane. And then I watch several heads explode as officers process that…

I had a rare opportunity to go even further with this scenario in Oklahoma City on Wednesday. I spoke at the Traffic Safety Forum of the Oklahoma Highway Safety Office. It’s a statewide gathering of LEOs, many of whom are police chiefs.

I had walked to dinner Tuesday night and noticed a streetcar track, across the street from the hotel. Someone in Tulsa had said that a bicyclist went down in OKC because the tracks “grabbed” the front tire and he was hurt when the bike went down. Here’s a pic of the layout I saw. I simply had to talk about it during my presentation. Why? 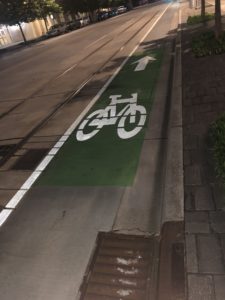 See anything problematic? Yep. The bike lane (lane 3) is against the curb and the streetcar tracks are in the next lane to the left (lane 2). Motorists can use lane 1 (hard to see in this pic) or lane 2. In Oklahoma, bicyclists are not required to use bicycle lanes, by the way. So, if there’s debris in the bike lane, or if a streetcar is coming, or if the gutter pan is part of the bike lane, bicyclists certainly would not want to be in the bike lane. What position puts them “as far right as is safe?” Is it lane 2, between the rails?

Just like train tracks, streetcar tracks are just about the right size to grab a bike’s tire. If that happens, the bicyclist may completely lose the ability to steer the bike…and fall. The fall is dangerous regardless, but if it is to the left, and there are motorists traveling in the left lane, it could even be fatal.

So the correct travel lane for the bicylist is…lane 1(the far left lane)! You should have seen the heads explode when I said that! And then I could see the heads nodding. An “AHA!” moment. I think even in that brief talk, I was able to get a bit of a change in perspective. I hope so.